From support-works
Jump to navigation Jump to search

There are various techniques that could be used for performing dynamic backups for Supportworks Version 7.

The information within this document covers the dynamic backup of Supportworks Version 7 server using resources supplied with Windows and the system's Core Services, but also refers to certain third-party products and a generic monitoring system. The parts of this document that cover database backup specifically are valid only for the databases that relate to the supplied SwSQL server.

If the Supportworks server is utilising any database system other than SwSQL as the main database (for example, Microsoft SQL Server), provision to replicate that database server should be made independently of the guidelines given in this document, as such replication would normally be the responsibility of your organisation's database administrators.

Note: Any kind of data replication, such as that described in this document, is only of use for recovery from hardware failures or operating-system failures. If failures are caused by configuration or data issues, these would merely be replicated in the Slave server. It should also be borne in mind that switch-overs from Master to Slave server, as described in this document, will still cause a certain amount of disruption among users, since it is unavoidable for network connections to be lost.

This is the scenario that would exist during normal running, before any switch-over has occurred.

In this section, a general outline is first given of how the Master and Slave servers relate to each other during normal running. This is followed by an indication of what has to be replicated on the Slave, and then by detailed accounts of how such replications may be accomplished.

Outline of Server Locations and Communication

The Master and Slave servers will be able to communicate with each other via TCP port number 5002, and they will also be able to utilise Windows File Copy from the Master to the Slave.

Outline of Elements to be Replicated

There are up to three distinct elements that may need to be replicated from a Master server to a Slave server (if you ignore the data in any third-party database system such as Microsoft SQL Server), and they are as follows:

Techniques for replicating each of these elements are described in the following four sections.

The SwSQL database system can be configured to dynamically replicate the data in its databases via the TCP networking protocol on communications port 5002. Although the configuration procedure itself requires server down time, the ongoing replication processes that result from this can proceed without any services having to be shut down. A possible set of configuration instructions is given here:

The Slave server's embedded SwSQL databases should now keep "in sync" with the Master server's SwSQL databases, without any services having to be stopped in the process. In order to confirm that data is in sync, you may use the following SQL statements in the Interactive SQL program:

For the copying of file data (such as configuration files and MIME attachments held outside of the databases) from the Master application server to the Slave application server, you could include a command line similar to the following in a regularly scheduled script run on the Master server:

where slave-server would be the name of the Slave server, and Hornbill-folder would be the network share name representing the Hornbill installation folder on that machine.

You could avoid service shutdowns by excluding the database files in \Core Services\SwSqlServer\data from the xcopy and instead replicating that data by means of the configuration method described in Replicating SwSQL Server Database Data above. Thus, rather than specifying a complete copy of the Hornbill installation folder using a single command line, you would have separate xcopy command lines for all other folders.

Alternatively, if you wish to retain the simplicity of a single xcopy command line, you could exclude the database files by denying rights to access (and hence copy from) the \Core Services\SwSqlServer\data folder on the Master server for all accounts but one domain account, and then scheduling the file-copy script to run in the context of any of those restricted accounts. The domain account could then still be used for unrestricted access as and when required.

For custom registry data relating to HTTP aliases, the only way you can replicate this is by manually editing either or both of the following registry keys on the Slave server whenever you have modified the corresponding ones on the Master server:

To maintain readiness for a switch-over, one Windows service - named SwServerService - would need to be monitored on the Master application server. Then, if this service entered a non-running state, the Supportworks services on the Slave application server would need to be started (from the standby stopped state) in order to bring that server from its “warm” state to its “hot” state - and this would constitute the switch-over.

It is therefore envisaged that any monitoring system used must be able to monitor Windows services on one server and invoke, upon any alteration in the state of such a service, batch files and/or script files (such as Windows Power Shell scripts) to run the Supportworks services on the other server.

At the simplest level, the required Supportworks services could be invoked from the Recovery properties of the monitored service itself, as in the following screenshot: 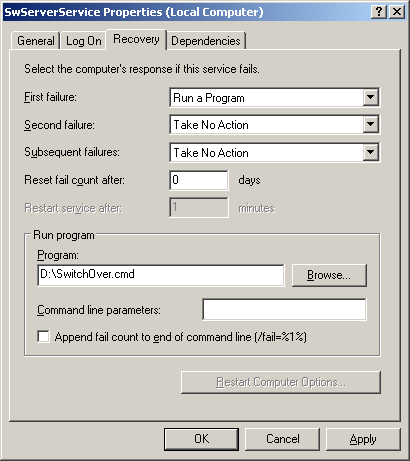 Any batch or script file (such as SwitchOver.cmd above) that would need to be invoked on the Slave application server for a switch-over to occur would have to include the command lines listed here:

The "before" and "after" switch-over states of the Supportworks services on either of the servers are shown in the two tables below.

There is one table (named swsystag) within the database that would not require replicating.

Excluding a table from replication is possible, but there are various methods by which this can be done, so a decision as to which method to use would need to be made.

This document is, by no means, a definitive solution, as backup strategies and/or disaster recovery options are covered in more depth during any requirements/analysis phases of Supportworks implementations - in order to best suit the individual environment(s) into which Supportworks is deployed.

For an easier and more comprehensive solution to DR, it may be worth considering the use of a server virtualisation product that has a migration option (such as VMware with vMotion). This should allow the standby server to retain its network identity and connections, resulting in switch-overs that are undetectable by users. See the FAQ entitled "Virtual Server Migration" for the basic requirements.